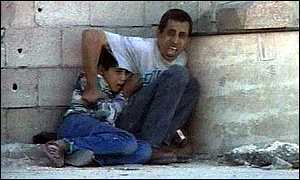 Richard Landes, who has been doggedly pursuing the truth of this incident for years, writes:

Please sign the petition and send it to everyone. Philippe Karsenty’s appeal trial is coming up and this petition is part of an effort to pressure France2 and the Justice system.

People around the world who depend on the media for reliability, accuracy, and transparency in reporting, demand that France2 release the unedited video tapes (”rushes”) that its Palestinian cameraman, Talal abu Rahmah, sent them on September 30 and October 1, 2000 from Gaza.

On September 30, 2000, your Middle East correspondent Charles Enderlin, broadcast a story about Muhammad al-Durah, a 12-year old Palestinian boy. Using the footage and the testimony from his cameraman, Talal abu Rahmah, Enderlin reported that Israeli soldiers had targeted and killed the boy. That allegation of deliberate murder spread instantaneously around the world.

Extensive doubts have emerged about almost every claim of this explosive report, and they raise serious questions about both the journalistic integrity of the cameraman and the professional judgment of his employer, your correspondent Charles Enderlin.

As a result, the raw footage France2 received from Talal abu Rahmah represent key evidence in this crucial case.

But instead of releasing the tapes, your institution has responded to criticism of your correspondent’s broadcast by suing French citizens for defamation and keeping the tapes secret for nearly seven years now.