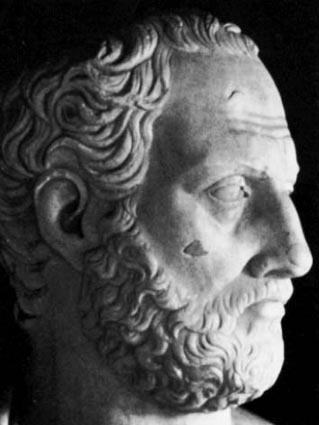 This post was prompted by a post at The Contentious Centrist which in turn was prompted by discussion at Bob from Brockley, But I am a Liberal! and elsewhere. Thanks to all of you. Times like these make me really glad we have the Internet. We should all thank Al Gore for that I suppose.

What follows is something I wrote regarding Thucydides’ understanding of politics, specifically the role of fear. Fear is a central motif in the writings of Thucydides, a motivating factor in the behavior of the Athenians and Spartans in the Peloponnesian War (All citations are from The Landmark Thucydides: A Comprehensive Guide to the Peloponnesian War (New York: Free Press, 1996).

In describing the causes of the Peloponnesian War, Thucydides notes Athens had shifted from a largely insular polis to a sea-based empire after the defeat of Persia in 480-79 BCE. The Athenians adopted the Persian system of empire to develop democracy at home while oppressing those abroad (1.89.1-1.117.3). As mentioned in “Pericles’ Funeral Oration,” the Athenian system of government was dominated by freedom in political and personal affairs and Athenian society provided ample opportunity for pursuit of pleasure and recreation (2.37-2.38). This was a society that enjoyed leisure and the arts.

At first Athens ruled through general congresses with allies who, while not completely independent, were largely autonomous (1.97). Over time, these political allies functioned as tributary polities, with the central state of Athens requiring ever growing monetary contributions to the alliance (1.99).

An increasingly sea-focused empire provided the freedom and capital to wage war both imaginatively and continuously (2.39.2-2.39.3) meaning the past limiting protocols of the polis did not apply to an increasingly restive Athens (1.80.3-1.81.6; 1.142.1-1.144.3). As Victor Davis Hanson notes, “the polis was, after all, an egalitarian but closed and static institution that could not adapt well to the military, economic, and political challenges of the wider Mediterranean world, changes initiated by the Persian invasion but dramatically and tragically elaborated by the virulent war between its more distinctive representatives, Athens and Sparta” (xx).

In contrast to Athens, Sparta was not typified by independent yeomen farmers. Instead, the enslavement of nearly 250,000 people, known as Helots, excused an armed elite from working their own plots. An ever growing underclass was kept under routine surveillance for fear of uprising and rebellion, particularly after Helot revolts (the Messenian Wars) in 640 BCE and 665 BCE. Sparta represented the rise of the first true militaristic culture of the West: mandatory military training for all males from age seven up, the rise of a professional army (1.18.2; 4.40.2; 5.66.2-5.72.4), able to put down local insurrection (4.80.2-4.80.4), or to absorb territory in the Peloponnesus (1.91.1; 1.76.1). This was a land-centered autocracy dominated by the Dorian gentry which was conservative and isolationist.

While the political culture of the Spartans was dominated by insularity that of Athens was characterized by liberalism and Ionian commerce. As the influence and military might of Athens increased in the Hellenes the fear, “which this inspired in Sparta, made war inevitable (1.23.6).” For Thucydides the greatest danger to Athens was not Spartan invasion but the sheer recklessness of its own government (1.143.4-1.143.5; 2.13.3-2.13.8; 1.144.1). In a democratic system of government, “a simple majority of the citizenry, urged on an incensed by clever demagogues, might capriciously send out military forces in unnecessary and exhausting adventures (2.65.11-2.65.12; 6.31.1-6.31.5).”

Sparta could invade Athens but a terrestrial army was unable to bring a maritime power like Athens to complete defeat (1.143.4-1.144.3; 2.65.11-2.65.13). A Spartan victory required a thorough change in the Spartan’s political and military culture (1.69.4-1.70.8; 1.81.1-1.81.6; 1.84.1-1.84.4) including acquiring their own navy, cutting off the Athenian tribute system, and spreading insurrection among Athenian allies (1.121.2-1.121.5; 1.142.2-1.143.3). The two combatants pursued increasingly harsh policies and abandoned past restrictions on Greek war-making including salting arable farmland. This lead to a military conflict with no clear victorious party and the destruction of the Greek city-state system.

In addition to military assaults and defeats, the Athenians also experienced a devastating plague during the War. As increasing populations fled the Spartan onslaught, refugees moved into already crowded and deteriorating conditions. This facilitated the growth of an epidemic. Traditional burial rites were upset due the magnitude of victims (2.52). In this chaotic and tragic moment, riots ensued, mobs ran rampant, and Athens experienced a breakdown of morality and social norms (2.53). As fear among the population increased, the Athenians began to lose faith in Pericles as he implored them to put the needs of the State before private concerns (2.59-2.60).

Pericles encouraged the Athenians to stand firm. After all, strategically everything was going according to plan besides the unpredicted plague (2.64). The Athenians were a strong maritime empire who had little to fear from the closed society of the Spartans. Pericles implored the Athenians to not give in to their fears and place trust in his leadership abilities. The ability to bear arms, courage in the face of the enemy, and dying honorably were all-important at this crucial moment. In short, the Funeral Oration was an ideological justification for continuing the war and a willingness for societal sacrifice. Why would a free and democratic people be willing to make this sacrifice? Because the establishment of the Athenian empire had made the Athenian standard of living, their leisure, their culture, their enjoyment of the arts, possible. More than a rationale for war, the Funeral Oration was a justification for the Athenian way of life.

The true danger in this situation was the fickleness of the voters. In politically fearful conditions like wars and plagues, there was a need for a strong and authoritative leader or else the government would succumb to demagogues. For Thucydides, by not giving in to the fears of the multitude, Pericles exhibited true leadership (2.65). Pericles’ successors, the demagogues, failed in this regard (2.65.10). Subsequently, Athens was assaulted continuously (2.75-2.79). In short, Athens lost the war by not following Pericles’ advice and succumbing to the fear of the demos. It’s an ancient story that has relevance today because the long-term result was the collapse of the Greek city-state system i.e. “the West.”

The History of the Peloponnesian War