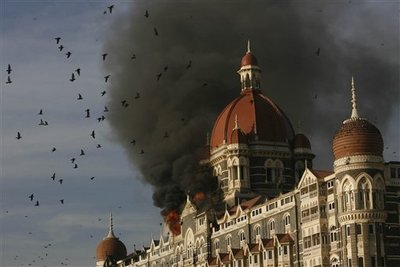 Mumbai, India has been hit by another terrorist attack. Details remain sketchy but a group calling itself the Deccan Mujahideen has claimed responsibility. It appears the terrorists approached the city via boat, whether hijacked or an accomplice vessel, and switched to smaller dinghies to come ashore. After landing, they attacked multiple targets throughout Mumbai.

Unlike previous attacks, the terrorists used small arms and grenades rather than high explosive devices. Early reports focused on the explicit targeting of foreigners at the Oberoi Trident and Taj hotels. However, busy locations frequented by Indians, such as the Chhatrapati Shivaji train station and the Nariman House residential and business complex were also attacked. Nariman House is the location of Chabad Lubavich’s Mumbai center.

Indian authorities report the terrorists appeared highly trained and knowledgeable of the layout of the hotels and other targets. According to the BBC, an unidentified Indian commando stated, “Not everybody can fire the AK series of weapons, not everybody can throw grenades like that,” he said. “By using such weapons and explosives, it is obvious that they would have been trained somewhere.” 140 people are reported dead and I expect this number to rise over the days as buildings are secured and cleared of terrorists.

Here are reports and commentary from around the web:

Excellent coverage may be found at the website for The Hindu and India Express newspapers and Desi Pundit blog.

Even as special forces continued to battle the terrorists, investigators have been working to piece together the sequence of events that led up to the massacre that started on Wednesday night.

Based on the continuing interrogation of arrested Lashkar terrorist Ajmal Amir Kamal, investigators believe the 12 terrorists who left Karachi on a merchant ship hijacked a fishing boat to facilitate their final assault on Mumbai.

According to Kamal, the group hijacked the Porbandar-registered Kuber to avoid detection by Indian Navy and Coast Guard patrols, which had a considerable presence in off Mumbai.

While one group of terrorists used the hijacked boat to land at Sassoon Docks on the eastern coast of Mumbai, a second group used a fibreglass lifeboat to row west to the Cuffe Parade fisherman’s colony.

Before leaving the fishing boat, the terrorists beheaded its captain, who Gujarat authorities have identified as Balwant Tandel, from Una village in the Union Territory of Diu. There is no word on the fate of the remaining crew of five.

Israeli security experts have said that the Indian security forces were premature in storming the besieged Nariman House.

“Indians should have sanitised the area and first collected intelligence about the terrorists before launching flushing out operations,” a media report here said, quoting the experts.

“In hostage situations, the first thing the forces are supposed to do is assemble at the scene and begin collecting intelligence,” a former official in Israel’s famed anti-terror agency Shin Bet told The Jerusalem Post.

“In this case, it appears that the forces showed up at the scene and immediately began exchanging fire with the terrorists instead of first taking control of the area,” he said.

One must always be suspicious when a “new” terrorist organization crops up. Today’s horrific attacks in Mumbai were claimed by a previously unknown group calling itself the Deccan Mujahideen. But one India journalist claims the pattern of the attacks suggests that Lashkar-e-Taiba, a nasty Islamist organization based in Lahore, Pakistan, and with a significant presence in Kashmir and links to al Qaeda, may be to blame.

Here’s where it gets interesting — and I stress here that I am just speculating. Lashkar-e-Taiba’s main goal is to expel India from Kashmir. In the past, some have accused elements of the Pakistani military and intelligence services of having ties to the group. Pakistan’s government has always hotly denied such accusations.

Pakistani President Asif Ali Zardari has in recent weeks moved closer to the United States, made some significant gestures toward India, and moved to shut down the political wing of the ISI, Pakisan’s powerful intelligence service (that’s the unit that tries to steal elections). How likely is it that some angry “rogue elements” of the ISI, aligned with Kashmiri jihadists and a team of Indian domestic extremists, sought to head off these moves? I have no idea, but it’s definitely a theory worth exploring.

There’s another more straighforward explanation for today’s attacks — revenge. A group calling itself the “Indian Mujahideen” has claimed responsibility for attacks in a number of different cities over the past several months. The Indian Mujahideen sent a warning in September expressing anger over recent raids by the city’s antiterrorism squad (ATS). Today’s message from the Deccan Mujahideen appears to be identical…

Abe Greenwald (Contentions): Return of the Root Cause

The Chief Minister of Mumbai, Vilasrao Deshmukh claims that “British citizens of Pakistani origin” were among the armed terrorists who took over various sites in the city. If true, this puts a new twist on Indian Prime Minister Manmohan Singh’s statement that “external forces” were responsible for the attack. Time and Newsweek can publish all the articles they want about a “mounting sense of persecution” among Muslims in India, but if Indian businessmen (and foreign tourists) are being slaughtered by loyal subjects of the Crown, I’d say the media’s emphasis is a little off-base.

Islamic terrorists don’t need a regional excuse; Western journalists do. Nothing demonstrates this better than the shell game playing out in India this Thanksgiving weekend. One of the terrorists who seized the Oberoi Trident hotel told an Indian news station by phone, “We love this as our country but when our mothers and sisters were being killed, where was everybody?” and then his colleagues went and set off bombs to kill all the neglectful Indian lawmakers in . . . a Jewish outreach center.

Martin in the Margins: Mumbai and the Theology of Death

At lunchtime today, I listened to an insensitive, boneheaded Radio 4 presenter asking the Indian ambassador whether, given that the Mumbai attackers were probably Islamists, his government should now start attending seriously to the grievances of its Muslim population, as Britain had to do after 7/7. It’s enough to make you weep. In something he wrote after 9/11, but which I can’t find right now, Christopher Hitchens recalled asking some Chilean exile friends whether they were tempted to launch a similar attack on America, after the CIA-backed overthrow of Allende. They were horrified at the thought. Genuine radicals, those whose radicalism arises from a love of humanity and rage at inequality and injustice, don’t tend to see the mass murder of innocent people as a legitimate tactic. The murderers of Mumbai, like the Baader-Meinhof killers that I wrote about the other day, were not reacting to ‘grievances’, unless they were grievances imagined in their twisted theology of victimhood, but acting out the logical dictates of a nihilistic and death-loving ideology.

We’re continually being told that a solution to the Palestinian question will bind up the wounds inflicted on the pride of certain sections of Muslim opinion by the existence of a state for Jews. It’s never been a very convincing view and every attack like this makes it less so. A solution to the Palestinian question must be found for the sake of the Palestinians themselves and not because it would cool the ardor of radical Muslim opinion in India, Pakistan, Indonesia or anywhere else. To put it another way, does anyone really believe that the coming into existence of a Palestinian state would have convinced the Mumbai terrorists not to attack the Jewish centre?

Indian troops have stormed the Chabad house. Rabbi Gavriel Holtzberg and his wife, Rivka, were among the murdered. JTA notes:

Conflicting reports following the takeover of Mumbai’s Chabad-Lubavitch house in the terrorist attacks in India, which left more than 140 dead, prompted confusion and anxiety surrounding the fate of the house’s occupants, including the Holtzbergs.

Four Israelis were among those freed from the Trident-Oberoi luxury hotel along with other hostages late Friday morning, according to the Israeli Foreign Ministry…

On Thursday afternoon, Indian commandos surrounded the Nariman House, where Chabad is located, with plans to storm in and release the hostages. There reportedly were four terrorists holed up inside with six hostages. Indian special forces reportedly killed one terrorist in the building.

Earlier Thursday, the hostage takers released the Holtzberg’s 2-year-old son and the building’s cook, who said that the couple was alive but unconscious…

The Chabad house is located at 5 Hormusji Street in Mumbai. India is a popular destination for young Israeli backpackers, who often make the trip after their army service. The Holtzbergs moved to Mumbai from Brooklyn, New York in 2003 to do Jewish outreach work in India.

Concern about the fate of the Chabad rabbi and his wife mounted throughout the day, with the Brooklyn-based organization issuing calls for prayer to Jews the world over. The National Council of Young Israel also sent out an alert asking Jews to pray for the rabbi and his wife.

“One friend of Gavriel Holtzberg reported receiving an e-mail from the Mumbai rabbi at 11:30 p.m. local time,” Chabad.org reported. “The Israeli Consulate was in touch with Holtzberg, but the line was cut in middle of the conversation. No further contact has since been established.”

On Thursday morning, according to the Jerusalem Post, the Chabad rabbi’s toddler son was rushed from the house in the arms of one of the Jewish center’s employees, Sandra Samuel.

“I took the child, I just grabbed the baby and ran out,” said Samuel, 44, who was identified as a cook.