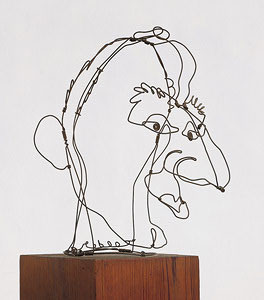 [Portrait of Jimmy Durante, 1926. Photo courtesy of the Calder Foundation]

My wife and I went to see “Alexander Calder: The Paris Years, 1926-1933” at the Whitney Museum. I have been fascinated with Calder’s work for many years and have seen his mobiles and stabiles in a variety of museums. His circus (part of the Whitney’s permanent collection) is always a joy to see but the most intriguing pieces for me at this exhibition were his wire sculptures, especially the portraits. 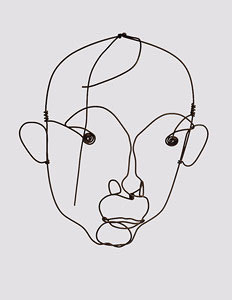 [Portrait of Joan Miro, 1930. Photo courtesy of the Calder Foundation]

If you are unfamiliar with the artist, here is a bio:

Alexander Calder was born in 1898, the second child of artist parents—his father was a sculptor and his mother a painter. Because his father, Alexander Stirling Calder, received public commissions, the family traversed the country throughout Calder’s childhood. Calder was encouraged to create, and from the age of eight he always had his own workshop wherever the family lived. For Christmas in 1909, Calder presented his parents with two of his first sculptures, a tiny dog and duck cut from a brass sheet and bent into formation. The duck is kinetic—it rocks back and forth when tapped. Even at age eleven, his facility in handling materials was apparent.

Despite his talents, Calder did not originally set out to become an artist. He instead enrolled at the Stevens Institute of Technology after high school and graduated in 1919 with an engineering degree. Calder worked for several years after graduation at various jobs, including as a hydraulics engineer and automotive engineer, timekeeper in a logging camp, and fireman in a ship’s boiler room. While serving in the latter occupation, on a ship from New York bound for San Francisco, Calder awoke on the deck to see both a brilliant sunrise and a scintillating full moon; each was visible on opposite horizons (the ship then lay off the Guatemalan coast). The experience made a lasting impression on Calder: he would refer to it throughout his life.

Calder committed to becoming an artist shortly thereafter, and in 1923 he moved to New York and enrolled at the Art Students League. He also took a job illustrating for the National Police Gazette, which sent him to the Ringling Brothers and Barnum & Bailey Circus to sketch circus scenes for two weeks in 1925. The circus became a lifelong interest of Calder’s, and after moving to Paris in 1926, he created his Cirque Calder, a complex and unique body of art. The assemblage included diminutive performers, animals, and props he had observed at the Ringling Brothers Circus. Fashioned from wire, leather, cloth, and other found materials, Cirque Calder was designed to be manipulated manually by Calder. Every piece was small enough to be packed into a large trunk, enabling the artist to carry it with him and hold performances anywhere. Its first performance was held in Paris for an audience of friends and peers, and soon Calder was presenting the circus in both Paris and New York to much success. Calder’s renderings of his circus often lasted about two hours and were quite elaborate. Indeed, the Cirque Calder predated performance art by forty years.

Calder found he enjoyed working with wire for his circus: he soon began to sculpt from this material portraits of his friends and public figures of the day. Word traveled about the inventive artist, and in 1928 Calder was given his first solo gallery show at the Weyhe Gallery in New York. The show at Weyhe was soon followed by others in New York, as well as in Paris and Berlin: as a result, Calder spent much time crossing the ocean by boat. He met Louisa James (a grandniece of writer Henry James) on one of these steamer journeys and the two were married in January 1931. He also became friendly with many prominent artists and intellectuals of the early twentieth century at this time, including Joan Miró, Fernand Léger, James Johnson Sweeney, and Marcel Duchamp.

When Alexander “Sandy” Calder (1898–1976), arrived in Paris in 1926, he aspired to be a painter; when he left in 1933, he had evolved into the artist we know today: an international figure and defining force in twentieth-century sculpture. In these seven years Calder’s fluid, animating drawn line transformed from two dimensions to three, from ink and paint to wire, and his radical innovations included openform wire caricature portraits, a bestiary of wire animals, his beloved and critically important miniature Circus (1926–31), abstract and figurative sculptures, and his paradigm-shifting “mobiles.”

This is short video of the Cirque du Calder:

I know a few readers of this blog are interested in the Spanish Civil War. Calder designed a mercury fountain commissioned by the Spanish Republic for the 1937 World Exhibition in Paris. The artwork is a memorial to the siege of Almadén by the forces of General Franco. At that time, Almadén supplied 60% of the world’s mercury. The fountain is located at the Fundació Joan Miró in Barcelona. Calder also supported Spanish Refugee Aid.