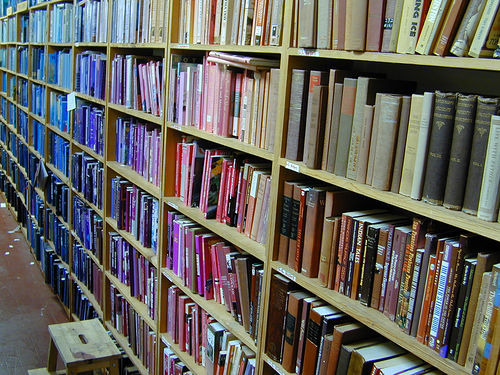 H/t to Bob for this one on academic books “fit for human consumption”.

Both lists are in alpha order according to author’s last name:

Paul Avrich, Anarchist Voices. What can I say? This book is one of those that led me to anarchism in a concrete way. Here is an excerpt (p. 329) from the interview with Julius Seltzer, an activist in the Jewish anarchist movement in Toronto during the first decades of the twentieth century. How times have changed…

The people in the anarchist movement were the most wonderful in the world. That alone made the movement great. It was one big family. Some of the best were not well-known but were dedicated, simple people, such as Lilian Kisliuk of Washington, D.C., a schoolteacher and daughter of a veteran anarchist. The anarchist ideal is zaftig [juicy]. I am with it all the time, all my life, always get great pleasure from it, from the ideas, the people the comradeship. You meet an anarchist and a socialist and they are completely different. The anarchist is soft, mild, warm–the other dried out.

George Esenwein. Anarchist Ideology and the Working-Class Movement in Spain, 1868-1898. An excellent text for anyone interested in the precursors to the Spanish Anarchism of the Civil War era.

Benjamin Martin. The Agony of Modernization: Labor and Industrialization in Spain. Martin is a labor activist who spent years mining the archives. The result is a somewhat dry, yet nonetheless readable account of Spain’s transition from craft to industrial production with much attention paid to the various organizational, political and ideological divisions and schisms within the Spanish labor movement.

James Martin. Men Against the State: The Expositors of Individualist Anarchism, 1827-1908. Biographical snippets on some of the key minds in the individualist anarchist tendency.

William Reichert. Partisans of Freedom: A Study in American Anarchism. From the preface:

This book is the result of my concern that the record ought to be made more accurate with reference to what anarchism is all about, and thus I have attempted in the pages that follow to give as honest an account of what American anarchists have said and [viii] believed as is humanly possible. I say “humanly possible” because I fully recognize how difficult it is to construct an accurate report of what anyone believes in the realm of ideology where subjective feelings and hard objective facts stand back to back in a shadowy twilight that invites the observer to interpret what he sees after the familiar patterns of value he holds in his own mind’s eye. In order to minimize the distortion that inevitably accompanies any social or political writing, I have attempted throughout this study to report what anarchists have said as closely as possible after their own viewpoints with as little interpretation of my own as possible; I may well have failed in my quest for objectivity but this has not been because of a lack of good intentions on my part.

William I. Robinson. Promoting Polyarchy: Globalization, US Intervention, and Hegemony.  A Gramscian approach to international relations.

William H. Sewell. Language and Revolution in France: The Language of Labor from the Old Regime to 1848. At the time, this book blew my mind. For the first time–for me at least–here was an author arguing that labor organization in Europe did not result as a reaction to industrialization. Instead, the modern labor movement was built on the previous craft and guild structures and ideology. A wonderful read.

James Weinstein. The Corporate Ideal and the Liberal State, 1900-1918. Read this book during the Clinton years. At that time I saw very little difference between the Democratic and Republican parties, especially regarding their aquiessence to business interests. Weinstein posits two theses:

The first is that the political ideology now dominant in the United States, and the broad programmatic outlines of the liberal state (known by such names as the New Freedom, the New Deal, the New Frontier, and the Great Society) had been worked out and, in part, tried out by the end of the First World War. The second is that the ideal of a liberal corporate social order was formulated and developed under the aegis and supervision of those who then, as now, enjoyed ideological and political hegemony in the United States: the more sophisticated leaders of America’s largest corporations and financial institutions.

George Esenwein. Anarchist Ideology and the Working-Class Movement in Spain, 1868-1898.

Karl Popper. The Open Society and its Enemies,   Vol. 1 and 2. From the publisher:

Written in political exile in New Zealand during the Second World War and first published in two volumes in 1945, Karl Popper’s The Open Society and Its Enemies is one of the most famous and influential books of the twentieth century. Hailed by Bertrand Russell as a ‘vigorous and profound defence of democracy’, its now legendary attack on the philosophies of Plato, Hegel and Marx prophesied the collapse of communism in Eastern Europe and exposed the fatal flaws of socially engineered political systems. Popper’s highly accessible style, his erudite and lucid explanations of the thought of great philosophers and the recent resurgence of totalitarian regimes around the world are just three the reasons for the enduring popularity of The Open Society and Its Enemies and why it demands to be read today and in years to come.

William H. Sewell. Language and Revolution in France: The Language of Labor from the Old Regime to 1848.

Michael Seidman. Republic of Egos: A Social History of the Spanish Civil War and Workers Against Work: Labor in Paris and Barcelona During the Popular Fronts. Seidman’s approach is eclectic and unique. Rather than viewing ideology as a major factor in collective action, he addresses human physical needs like hunger, thirst, and shelter.

Robert Steinfeld. Coercion, Contract, and Free Labor in the Nineteenth Century. Steinfeld shows how the division between “free” and “unfree” labor is not as clear-cut as some authors claim. Sources referenced by Steinfeld include parliamentary minutes, court cases, bills and prosecutions under the Master and Servant Act. From the Introduction:

The account presented in this book turns the traditional narrative of free labor on its head. It shows that the introduction of free contract and free markets in labor in the nineteenth century did not produce what we in the twentieth century consider free labor. It produced a regime that employed nonpecuniary pressures to extract labor from workers, pressures that by twentieth-century standards make the wage work a form of coerced contractual labor.

Zeev Sternhell. Neither Right Nor Left: Fascist Ideology in France. Is fascism an ideology of the extreme right or the extreme left? If you spend most of your time in leftist circles, like I once did, it is clearly the former. If you are a die hard conservative,  fascism is national socialism, with the emphasis on socialism. Like all great historians, Sternhell attempts to understand fascists and fascism on its own terms. Not according to analysis of fascism’s opponents.

“Few books on European history in recent memory have caused such controversy and commotion,” wrote Robert Wohl in 1991 in a major review of Neither Right nor Left. Listed by Le Monde as one of the forty most important books published in France during the 1980s, this explosive work asserts that fascism was an important part of the mainstream of European history, not just a temporary development in Germany and Italy but a significant aspect of French culture as well. Neither right nor left, fascism united antibourgeois, antiliberal nationalism, and revolutionary syndicalist thought, each of which joined in reflecting the political culture inherited from eighteenth-century France. From the first, Sternhell’s argument generated strong feelings among people who wished to forget the Vichy years, and his themes drew enormous public attention in 1994, as Paul Touvier was condemned for crimes against humanity and a new biography probed President Mitterand’s Vichy connections. The author’s new preface speaks to the debates of 1994 and reinforces the necessity of acknowledging the past, as President Chirac has recently done on France’s behalf.